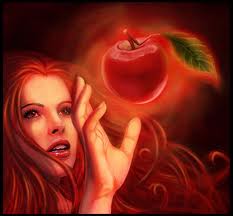 When Eve sinned, a seismic shift occurred in her soul though she was yet unaware. The quiet departure of the Holy Spirt from her heart devastated her conscience, but the emptiness was not felt as yet. She hastened to Adam luring him to partake of the forbidden fruit. He followed her. A  fundamental transformation then occurred in the human family. The genetics of men and women were forever altered after Adam sinned. The robe of light was lost and they knew that they were naked – devoid of the Spirit of God. The only legacy they could now leave to their prodigy would be that nakedness. Eve could now only bequeath to her daughters a legacy of succumbing to the same temptations that caused her own fall. Thereafter the tendency for women to yield to the longing for independence to forge new paths would cause her daughters to wander from God’s roles for them. Women would tend to be seduced into spiritualism and occultism as an attempt to become like god. Women would be disposed towards sensuality to entice men to submit to their desires.

Sin had upset their union and ever after there would be this yearning for oneness, but to it unnaturally coupled a struggle for dominion. She would desire him, she would long for him because his affections had been estranged from her as we discern from the Genesis narrative. I can only imagine the searing tears she must have shed as she heard him say of her, “the woman whom Thou gavest to be with me”. Where was the tender poetic endearment “bone of my bones and flesh of my flesh? “ She was now ‘yours’ not ‘mine’. Sin had marred the sacred oneness. However, merged with her longings would be strivings for supremacy. She would continue to essay for that feminine dominance that had lead Adam to follow her into sin. Control over Adam tasted good, it was an exquisite elixir, and she would always want more.

As had Eve when she offered Adam the fruit, so women would attempt possession of dominion by the subtle wiles within her power – stealth, sensuality, and manipulation. However, her attempts to usurp dominion would not work. As God had spoken, He would rule. Her efforts to take over would result in chaos, the disintegration of the family and further spiritual declination. Think of Rebekah’s control over Jacob in order to subvert Isaac’s intention to bequeath the birthright to Esau. She got her way, but never saw her beloved son again.  Think of Abraham and Sarah, and her misguided plans resulting in the birth of Ishmael. We are still reaping the baleful effects of her usurpation. Only the indwelling of the Holy Spirit can save women from reentering the same dark path toward the trees of the knowledge of good and evil with which we are presently surrounded.

We have been told a startling fact about the female nature. In ‘Fragments of Old Testament History’, we read the unnerving statement, “Satan chooses women, for he can use them more successfully than he can men”.-(1) A humbling appraisal for all women to contemplate in light of the assertions made by some that women are superior to men.  It may be that women succumb to Satan’s ploys more readily because hers is a more emotional and relational mind. Perhaps the dialogue with the Serpent at the forbidden tree opened Eve’s mind to the occult and imprinted that ‘openness’ or susceptibility in the female gender. I just do not know for sure.

However, we do know that statistically women are far more likely to use spirit mediums than men are. The American Federation of Certified Psychics and Mediums report these interesting statistics (2-6):

If the trend they report is accurate, women are far more likely to invest large sums of money to receive help from psychics.

As discussed before, the Edenic power struggle was replayed in the lives of Sarah and Abraham, Rebekah and Isaac, as well as Jezebel and Ahab. Today the debate in our churches over Women’s Ordination is but a repetition of that struggle for female dominance. It does not however stand alone. We see also the emergence of an intriguing trilogy – women’s ordination, homosexual rights and the emergent church. It is no coincidence that these three rise together. Like smoke swirling from the same bottomless pit, this ‘three-fold union’ compasses a broader invasion into our religion and darkens our horizon.

“In sociology, feminization is the shift in gender roles and sex roles in a society, group, or organization towards a focus upon the feminine. This is the opposite of a cultural focus upon masculinity.
Strong male icons in American culture like Ward Cleaver and John Wayne have been replaced in recent years by strong female icons and weak male icons like Homer Simpson.

It can also mean the incorporation of women into a group or a profession that was once dominated only by men.

Potential examples of feminization in society can include: The feminization of education – Majority female teachers, a female majority of students in higher education and a curriculum which is better suited to the learning process of women.[2]

On the other hand, the scriptures describe a patriarchal culture. A society is either a patriarchy or matriarchy; it cannot both or neither.  Egalitarianism is a deceptive myth of our modern age honed into prominence by the women’s movement. Nevertheless, God declared in Genesis that dominance had been given to the masculine gender. So it is and ever will be while we live in this world.

Satan is attempting to remove the patriarchy and replace it with his own governmental form. He himself attempted an upheaval in heaven to remove the Divine patriarchy of the Godhead, and he would like to inspire us to do the same. When women seek to replace men and become the heads of the church the image of Christ and His church is turned upside-down. According to Ephesians 5:22-32 women represent the church and men represent Christ, therefore the symbol of male headship must be regarded as sacred, for it reflects the divine reality.

Satan seeks to subvert the authority of Christ in the church using women as important vassals. We have paragons in our midst, which have epitomized the feminine, the ultimate purpose of which is the replacement of the masculine by the feminine. At first glance, it would not appear that the Catholic Church is a feminized church because of the preponderance of a male priesthood, but on closer inspection, we note that the religion is dominated by the mother worship of the Virgin Mary. The Virgin Mary actually supersedes the position of Christ. The New Age Church and Buddhism are feminized religions, which offer among their panoply of idols the worship feminine deities. Shall we allow the swirling smoke of paganism and ecstatic experience to engulf us as well?

Eden repeats itself throughout the ages in our cultures, our churches and in our hearts. Women’s ordination is our new forbidden fruit, promising unity but portending only deeper apostasy.

Will we eat of that forbidden fruit again?

References:
1) Satan’s Use of Women.–“And of Jezebel also spake the Lord, saying, The dogs shall eat Jezebel by the wall of Jezreel. Him that dieth of Ahab in the city the dogs shall eat; and him that dieth in the field shall the fowls of the air eat” (1 Kings 21:23-24). To the guilty king the prophet delivered a message of fearful import.  {10MR 76.1}

“Thus Satan used an unconsecrated woman to sway the heart of the king, and through the king to cause all Israel to sin. It is a terrible thing to be an instrument in the hands of Satan. Satan chooses women, for he can use them more successfully than he can men.”–Ms. 29, 1911, p. 13. (“Fragments of Old Testament History,” November 17, 1911.)