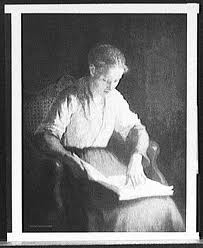 As a leaf uncurled,
a tiny tendril unfurled
warmed from ‘neath frozen tundra gray;
as from sleep she softly wakens
knowing him only
she is gently taken by
the touch of his heart, his mind, his voice.

Etchings sparse on muted linens
swirled to yellows, pinks, and greens
fusing then to luminous orange, bright and lyrical, fresh, serene.
So ’merges she from her chamber softly,
livened to lilt, to warm, to charm.

There once lying
so quietly waiting,
loveliness that was hers to own,
so quiescent, once O’ so stolid, it may be said so much like stone;
there she lay forever sleeping
so untouched, unfelt, unknown.

There now lying
warmed and wakened
knowing truths heretofore unknown
this gift of Ophir
the gift now breathing
to live, to move, and to have being.

The womanly wakens to life by the masculine
This exquisite elixir of the heart touched only by the manly.
She can come to life in no other way,
for we know that the woman was born out of the man.

Genesis 2:23
And Adam said,
This [is] now bone of my bones,
and flesh of my flesh:
she shall be called Woman,
because she was taken out of Man.

Proverbs 30:18
There be three [things which] are too wonderful for me,
yea, four which I know not:
The way of an eagle in the air;
the way of a serpent upon a rock;
the way of a ship in the midst of the sea;
and the way of a man with a maid.

6 comments on “Warmed to Life”